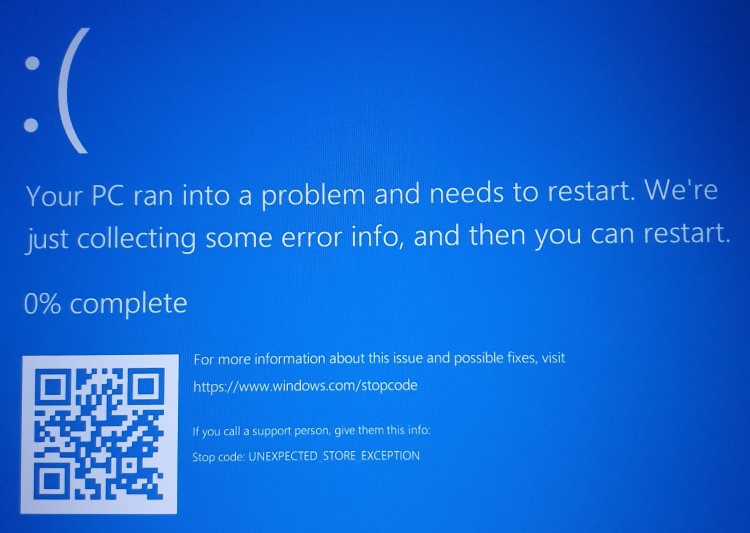 Is your PC crashing automatically while running? Are you able to see a blank blue screen? In such cases, it will show the error titled ‘Unexpected Store Exception.’ The blue blank screen which is shown to you is called stop code error. Not only this screen signifies death, but also it frustrates the user. In case, you are misunderstanding that the error has been caused due to the Microsoft Store.

Then, you are absolutely wrong. This error doesn’t have any relation to the Microsoft Store. What you will grasp in this article is to determine the distinct approaches of solving the Windows Unexpected Store Exception error in Windows 10!

How to Fix Unexpected Store Exception Error in Windows 10

Do you know that the Windows Unexpected Store Exception error can also occur due to the incompatible display drivers? Hence, we suggest you update them in case they are not updated.

Examine if the graphics have been downloaded. If not, then we suggest you download the drivers from your graphics card manufacturer’s website. In case, it does not work, then step up to another method, i.e., Method 2.

Does your PC contain any faulty or corrupt system files? If yes, they are the major reason for the Windows Unexpected Store Exception error on your PC. Therefore, it is better to remove them. But the question now arises, how will the user come to know if there is any faulty file on his PC? Windows has a self-built solution for it. It will scan your PC files for any error and repair it if it finds any.

Now, you don’t have to do anything. It will automatically scan and display any of the three types of messages.

If the third case occurs with you, then you can view the log which Windows Resource Protection could not repair by typing the certain command in Command Prompt.

Once you typed the command, the log which was not able to repair by Windows Resource Protection will be displayed on your PC screen. The ultimate option to repair such files is to uninstall it. Later on, if you want it again, you can install it as a fresh. Is your Windows Unexpected Store Exception error resolved? If not, then go ahead and try Method 3.

According to the report of numerous users, it has been seen that in most of the cases, the Windows Resource Protection error can also be caused by antivirus software on their PC. Thus, in case, if your PC has antivirus software installed on it, then it is recommended to deactivate it for a while. Don’t know how to disable the antivirus? Don’t worry. Just follow certain steps if you are using Windows Defender and get your error fixed.

Are you using third-party antivirus on your PC? Then, the following steps will help you to permanently uninstall it.

Inspect if the Windows Unexpected Store Exception error is solved. In case, it is not, we recommend you activate your third-party antivirus again for keeping your PC secure. Also, proceed further to Method 4.

You must be knowing about Fast Startup, which not only keeps your Windows 10 PC up-to-date with the latest features but also provides you faster boot speed. But do you know that it is by default enabled on your PC? Despite keeping your PC up-to-date, it is not able to load some of the drivers on your PC. The unsuccessful loading of drivers causes the Windows Unexpected Store Exception error. Hence, you could try out disabling the fast startup by following certain steps.

The error message will not appear for sure if you have followed the above steps fruitfully.

We hope that the above-mentioned methods might have solved your issue. In most of the cases, the Unexpected Store Exception error is caused due to the faulty display driver or installed antivirus on your PC. However, if this is not the case, the above-mentioned fixes will definitely solve your problem.

DX11 Feature Level 10.0 is Required to Run The Engine

Your Windows License Will Expire Soon Error in Windows 10

How to Fix Discord Update Failed in Windows 10

This Site Can’t Be Reached Error in Google Chrome

VAC Was Unable to Verify the Game Session {Fixed}